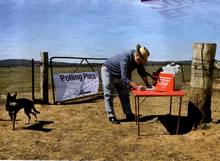 Whenever there is an election in the wind, so the cynics all have comments to make.  I sometimes wonder whether the reason for much of our cynicism is that the knockers and wingers in our society are always ready to talk but tend to baulk at becoming pro-active.

With all the printed material we receive in the letterbox, the numerous advertisements we see on television and the phone surveys we are asked to complete, it does all tend to get a bit much.  However, it is important we consider our choice carefully, for we are fortunate to live in a democratic country and at the end of the day, our vote does count.

Be it a Federal, State or even a Local Government election there are always those who begrudge the time taken to attend the polling booth and this often adds to the informal vote count.  These are often people who couldn’t really care who wins or loses as they have become complacent and tend not to appreciate the democracy in which we are fortunate to live.  They have little, or no thought for the broader community yet are often the first to winge about political decisions they dislike.

Many promises are made by politicians prior to an election and we are often disillusioned if these promises are not fulfilled.  But, do we make an effort to keep our politicians honest by telling them of our concerns?  Are we prepared to write or contact our local representatives if things we believe should be happening are not?  Do we ever get to know our local representatives and what they are supposedly arguing for on our behalf?

Like many Australians we often tend to just go along with life and don’t discuss the taboo subjects of politics or religion.  We really should be thankful we live in a democracy, because the alternative would seriously affect our freedom and our Australian way of life, so let’s consider carefully who we vote for at the next election.