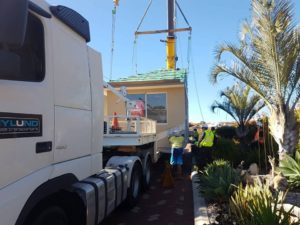 Up ahead the road narrowed.  Power lines that crossed from one side of the road to the other, sagged dangerously low in the middle. The white marker posts with their red and white sparkling reflectors lined the sides, indicating the extremities of the available road surface.

The truck carrying half a house had come to a halt in front of me.  It seemed an impossible task, I thought, as the traffic banked-up behind this monstrous sleeping snail.

The truck driver and his companion were carefully considering the situation along with much head scratching and chin stroking. Their minds made up, they decided they could proceed by mechanically raising one side of the trailer.  This in turn raised the side of the house above the top of the white posts on that side of the road.

A long-handled broom, wielded as required by the driver’s assistant, raised any drooping wires.  And so, with the problems solved, the whole lopsided load made slow, but steady, progress forward.

I thought at the time how important it is for us to carefully think out the solutions to our problems, rather than losing our temper and throwing in the towel.

No matter how impossible a situation might appear, if we apply a steady head to considering the problem, there’s usually a solution becomes available.