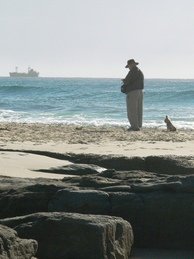 There is always one puppy in the litter which is different to the others.

Maybe it is a bit ugly or clumsy, but whatever the reason, it usually gets shunned by the others and is forced to fend for itself at an early age.

Such a puppy was our family pet, whom we called Boof.  His name was short for Boofhead, which seemed appropriate at the time as all the other puppies went to good homes.  No one wanted him and we couldn’t even give him away.

As it turned out we got to love Boof because he was different. We kept him ourselves and he became a most loyal and dedicated family pet.

Jesus was a radical sort of a bloke.  For Christians he is seen as the Messiah. For most others he is at least respected as a prophet.

Jesus was different because he failed to conform with many of the accepted issues of His day.  He wanted us to love and forgive instead of seeking self-satisfaction and revenge.

He was rejected by many, deserted by his friends and eventually killed for his beliefs.  Boof, on the other hand lived to a good age, was loved by us all and we never regretted keeping him.