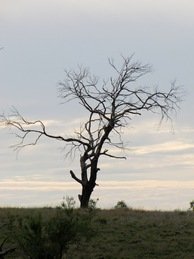 The workmen looked at him and laughed, then they moved on to choose others around him.

He was able to handle the sneers and crude remarks about his ability and his looks, but it was embarrassing seeing all his friends leave, heading for what was obviously exciting futures.

When they had gone he found it quite lonely on his own. His grotesque knotted limbs, the result of a childhood lightning strike, reached out in awkward silence in search of some form of recognition.

And then it happened!  He was chosen at last. “A coupla planks is about the best you’ll get outa that one mate”, one of the workers was heard to say.

At last he was to be used. But he questioned in his own mind what good he could do ‘as a couple of planks’.

He stood on top of Calvary on that first Good Friday. His strength was the only support the crucified Jesus was allowed.

He could not help but think he was the tree rejected by many, that had been chosen to be closest to his Lord on that fateful day.  This was truly his communion.

He held the body of Christ. The blood of the lamb seeped into the pores of his wooden flesh. He was one with his God. He was the tree that had become the cross of the ultimate sacrifice.