(This is the continuation of the DARWIN to BROOME & BACK story)

Originally built for large road trains transporting cattle from isolated stations to the ports of Derby and Wyndham, The Gibb River Road is an alternative route across The Kimberley to the Great Northern Highway.

It is unsealed for almost the entire length, 665km, from Derby to the junction of the great Northern Highway between Wyndham and Kununurra. The best time to travel the road is from April to November, once the creek levels have dropped and before the wet season starts. We travelled the road from West to East.

Before arriving in Derby we stopped off to see the Boab Prison Tree, an overnight detention spot used by police in the early days when transporting prisoners to court.

The tree was also used by settlers connected with the pearling industry. They were referred to as ‘blackbirders’ who kidnapped young Aboriginal men to work as divers and workers on the pearling boats.

Early pastoralists helped the blackbirders because they thought that removing the young men would guarantee peaceful behaviour from the older ones left behind. The Aboriginal people resisted.

One story of Aboriginal resistance is told about Jandamarra who, as a police black tracker, was known as pidgeon. He helped some of his people from the Bunuba tribe escape and was involved in the killing of a number of people including a police officer. He was hunted down and we followed his trail from Derby to Winjana Gorge National Park and the caves of Tunnel Creek. 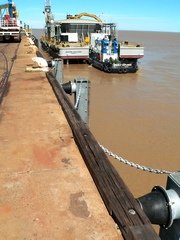 The first European to visit King Sound, on which Derby is situated was William Dampier in 1688. But the pastoral industry wasn’t established in the area until 1879.

Today Derby has a large Aboriginal population and is renown for its 12 metre tidal range, the second largest in the world. 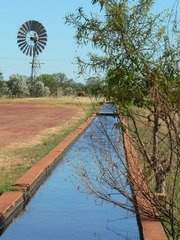 While no longer a cattle port, it is used by the mining industry to load ore onto tenders which transport their load to large ships out at sea.

One of the longest cattle water troughs I have ever seen is in this area. 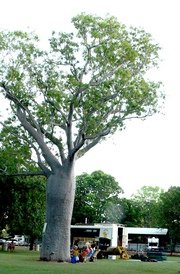 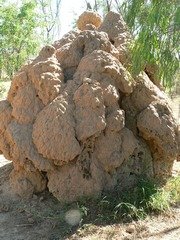 LARRKARDIY AND JILKARR
Larrkardiy, boab trees, and Jilkarr, termite mounds, are outstanding and enduring features of Indigenous belief and practice in The Kimberley.

The park consists of a 3.5km long Gorge formed by the Leonard River as it carves its way through the limestone of the Napier Range. The park is of international geological significance as it forms part of an extensive fossilized barrier reef from the Devonian times some 360 million years ago.

In 1894 the Aboriginal freedom fighter, Jandamarra and his followers armed with stolen guns attacked a party of 5 cattlemen killing 3 of them at Winjana Gorge. Jandamarra, who I see as the Aboriginal version of our Ned Kelly, staked out here to confront a police possee of 30 men. He was seriously wounded but continued his fight to defend his land and his people.

35 kms from Winjana Gorge, this park allowed us to explore a creek with permanent pools of fresh water as it tunnels through the limestone of the Napier Range.

We were warned that freshwater crocodiles sometimes inhabit the spring-fed pools within the tunnel. We were told they are not considered dangerous if you leave them alone. Armed with a decent torch each, we were determined to explore the mystical tunnel with or without its crocs.

The Tunnel was once known as the ‘cave of bats’ as it houses at least 5 bat species including the Ghost Bat, Australia’s only carnivorous bat. So the thinking was, if the crocs wouldn’t get us the bats might. Still we pressed on and we were so glad we did.

Inside the Tunnel it was as if you could feel a spiritual presence. This was an Aboriginal sacred site which I believe we were privileged to have been allowed to visit.

Aboriginal freedom fighter, Jandamarra and his followers avoided police and others for nearly 3 years using Tunnel Creek as a hideout. It was here at the entrance to the tunnel that Jandamarra was killed on 1st April 1897.

Ngauwudu is the name Wunambal Aboriginal people give to the Mitchell Plateau area in the far north Kimberley. It is located 350 kms north east of Derby and 270 kms north west of Wyndham by air.

We accessed it via a rough 4WD track from the Kalumburu Road, 172 kms north of the Gibb River Road junction.

The area contains a variety of plant life in mangroves, swamps, woodlands and even lush rainforest patches. Quite noticeable are the large palms (livistona eastonii) which can grow up to 18 metres tall and can be up to 280 years old.

The Mitchell Falls area was not explored by Europeans until 1921. William Easton led a State government expedition into the north Kimberley, naming the Mitchell River after Sir James Mitchell,, the then Premier of Western Australia.

On the way we called into a number of swimming locations at Bells Gorge, Galvan’s Gorge and Manning Gorge. 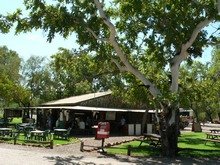 Around 120 kms west of Kununurra and only 16 kms off the Gibb River Road is El Questro, a private pastoral lease and what I believe is an oasis in The Kimberley.

It is considered one of the world’s most unique holiday resorts with accommodation ranging from tent camp sites to a $1,700 per night home.

The grass was lush, the water was plentiful and the beer was cold.

Helicoptors will fly you around the area to view spectacular gorges such as Emma, El Questro, and Amalia or you can go in your own 4WD to these places and more.

We visited Chamberlain Gorge and a ranger took us through the Gorge by boat and explained its features. We were fortunate enough to find a little rock wallaby up in one of the rock openings.

We also lay in the thermal pools at Zebedee Springs and relished the warmth of the crocodile free water while all around us were naturally growing lush tropical palms.

We found heaven in The Kimberley.

ABORIGINAL ROCK ART IN THE KIMBERLEY

Aboriginal people believe that Gulingi and Wunggurr creators travelled the land making the earth, the seas, mountains, rivers, waterholes and all living things.

Gulingi are associated with regeneration, creation of rain, renewal of resources and continuation of life. Gulingi left themselves throughout the region as landscape features and distinctive cave paintings.

Wunggurr are creator snakes. Their winding travels through the country with Gulingi made the rivers. Many came from the seas, and now reside in deep pools and waterholes. 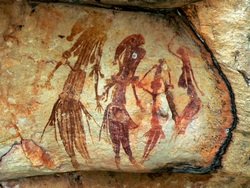 Named after its founder. The art form is more African than Australian Aboriginal. The local indigenous tribes do not accept it as Aboriginal art and as can be seen above have on many occasions painted over it with their own designs.

It is still not known how it got where it is or for that matter who the artist(s) were.

The first part of this story is called ‘DARWIN to BROOME & BACK’.  Read this part…