Back in 1997 there was a certain young man whose name was on every golfer’s lips. He had spent his childhood and youth being trained by his father and when it was considered he was ready, he then entered into the public life of the professional golfing circuit. 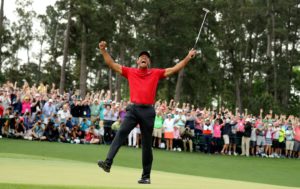 As the winner of that year’s prestigious American Open, he broke numerous records and people bowed down before him as he approached the eighteenth green to play his final putt on the last Sunday of the tournament. He was awarded the trophy and dressed in the coveted green winner’s jacket. His name – Tiger Woods.

On Palm Sunday many years ago, the same type of adulation given to Tiger Woods was given to another man who was also approaching the last hole in his round. He had performed miracles and healed many sick people along his journey to the extent that those in authority were fearful he might upset their control and power. He was duly disposed of. His final hole contained a cross. As he died, the man turned the fear of the thief beside him into love, which was typical of the man’s whole approach to life.

The Nike Company, with their well recognised “Tick” logo, claims to be one of the largest manufacturers of sporting footwear and clothing in the world. I can recall seeing one of their TV advertisements where a lot of young children were hitting golf balls. When asked who the person was they would most like to be. “Tiger Woods”, they each declared.

I wonder how many of us who carry the Spirit of the world’s greatest hero in our hearts would be proud enough, if asked the same question, to declare, “I would like most to be Jesus Christ”.

Sporting heroes come and go and ticks on logos will disappear with the clock of time. However, the Spirit of Jesus will be with us forever. Maybe it’s time we allowed the love of our God to drive away our fears so we might willingly step out on the course we are taking in life and get on with the job of helping God’s kingdom come.