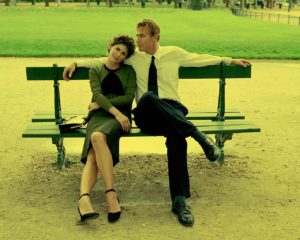 Being a creature of habit, I used to travel to work in the same train carriage each morning. I recall how one day, as the train stopped at the city terminal, I could see on the station seat opposite my window, a young couple with their arms around each other, apparently very much in love and oblivious to the peak hour traffic surrounding them.

Inwardly, I wished them well. The next day the same scene greeted me again. The couple were sitting in the same seat, smiling and cuddling each other.

I found I looked at this spot every morning hoping they would be there, as I was enjoying seeing two people so in love.

They didn’t even know me, and yet inwardly, I was wishing them well. The weeks turned into months and they maintained their ritual. Then as suddenly as they came, they disappeared.

Afterwards I looked at the empty seat they occupied each morning for so long and wondered about their lives. It was good for me seeing them each morning. It brightened up my day.

Maybe if more people were prepared to openly display their love for their partner, it would be good for them and also for those in the world around them.