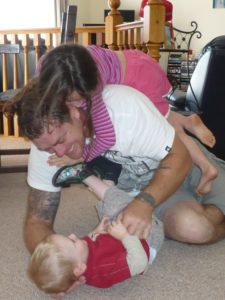 When our maker created Fathers, I’m sure He had a glint in His eye. He could see the important role mapped out for Dads since the beginning of time.

Well! someone has to be around to look after Mums and kids, push the trolley at supermarkets, mend the pushbikes and pay for the neighbour’s broken window that no one seemed to know who kicked the football through.

Sometimes Dads can get grumpy when they are tired and the radio just happens to be loud enough to be heard by half the world.

Dads can get upset with kids when, they bring their dogs into their bedrooms, say they’ve washed their hands when it’s obvious they haven’t, sit too close to the TV and when they won’t go to bed when they are told.

But behind the often worried face of every Dad lies a heart that wants only good things for his kids. Behind the rough exterior is kindness, gentleness and a barrel full of tears that might be hidden from the world, but is there nevertheless.

One thing Dads all agree on, is that it is most important to always try and be around for their kids. For all their faults, Dads, irrespective of their age, should still be very special in our lives and it is nice to tell them that occasionally.

Today would be a good day!