Nestled beside the Clarence River, inland from the Northern NSW coastal town of Yamba, is the colorful Celtic township of Maclean. The promotional brochures refer to the town as “The Scottish Town in Australia”.

We travelled to this special part of Australia along with friends and relatives because our son and his fiancé had chosen this area as the place in which they wanted to be married.

Driving towards Maclean from the highway is an extremely pleasant experience. The road is bordered on the right by the picturesque Clarence River and on the left by the gently swaying fields of sugar cane.

The first indication one gets that this area has a uniqueness of its own is the appearance of painted power poles. The lower sections are painted in different tartan colours and have the Clan name in large white lettering for all to admire. These brightly coloured poles are not just a welcoming town entrance gimmick in the main street; they are a feature of many of the streets around the whole town.

The area obtains its character because it was originally settled by Scots following the Highland Clearances of the 1850’s. Australia offered free or assisted passages to immigrants and many Scottish settlers were attracted by the offer. They settled in Maclean and today many of their descendants still live in the area.

Maclean has its own fishing fleet that tie up opposite the town in the Clarence River. Fresh prawns and seafood are available at the town’s restaurants, hotels and at the local fish co-operative. Also in the area is Australia’s oldest working sugar mill along with the only sugar refinery in New South Wales.

River Street contains most of the major businesses in the town and many of these are located in beautifully restored heritage buildings. Another classic feature of the town is that many of the street signs contain the name in both English and Gaelic. 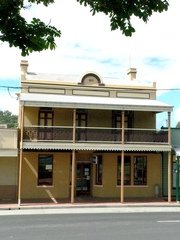 I spoke with some Maclean High School students who were wearing the Maclean Hunting Tartan as part of their uniform. They were proud of the Scottish connection the school has with the local area and told me their school song was sung to the tune of ‘Scotland the Brave’. 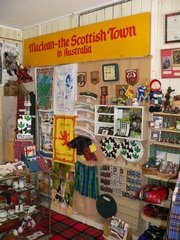 A walk around the town is not complete without a visit to ‘The Scottish Shop’ which is staffed by volunteers. Here you can purchase all manner of Scottish and local souvenirs which also include pre-loved kilts.

The shop assistant was only too willing to point out on a local map many of the town’s special attractions. One of these was the Cairn dedicated to the contribution Scottish settlers had made to the area. 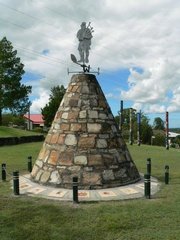 The Cairn is located in Stanford Park and contains stones brought in from Scotland.  Around the base are hand painted tiles showing many of the Scottish Clan coats of arms.

I was informed Maclean really comes to life each Easter when the annual Highland Gathering is held. There is a street parade, which of course includes numerous pipe bands from all over Australia. There are competitions for the bands, individual pipers, drummers and highland dancers. Highland sports are also a feature of the weekend where participants putt the shot, toss the caber and throw the hammer.

My volunteer at The Scottish Shop also told me of the “Kirkin’ The Tartan” celebration held on July 1st each year. It seems that Scots all over the world celebrate on this day the Wearing of the Tartan which the British had originally forbade. The Scots all come together to celebrate the lifting of the law and to have their Tartan blessed. 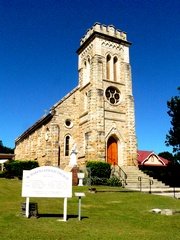 Having a surname of Mack is about as close as I can get to having a Scottish heritage. But after spending sometime in Maclean and the surrounding area and chatting to some of the local residents, I can now understand why many Australians with a Scottish family background choose this very special town in which to exchange their wedding vows.

Saint Mary’s Catholic Church is on a hill that overlooks the town of Maclean. It is an imposing structure made from local sandstone back in the 1890’s. The parish priest, Father Fitzwilliam, is a warm, caring man who loves the town and his church.

Maclean has an individual character unlike many other towns in Australia. The residents have preserved many of its heritage sites and have included attractive additions, such as the colorfully painted Tartan power poles.

In a country where white settlement history only goes back 200 years, it is refreshing to visit a town with a unique character like Maclean. 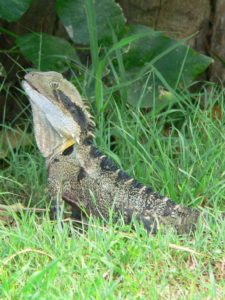