We all arrived in Darwin from different directions. Some by air from Queensland, others overland via Kakado, a couple from Tasmania and one from the USA.

Most of us were unsure what adventures lay ahead but we were excited at the prospect of exploring The Kimberly and other remote areas in the top part of our huge continent.

Some of us had travelled together the previous year to Cape York with our Heritage Tour driver, Jim. We had enjoyed ourselves and learned so much we decided to ‘saddle-up’ with Jim again for more fun and adventures.

Darwin, considered the most cosmopolitan city in Australia, can also claim to be the most modern. It was virtually rebuilt following the devastation wrecked by Cyclone Tracey in 1974. The architecture is indicative of the tropical climate and the pace of life is slower than that experienced in other Australian capital cities.

Departure morning and the 4WD Heritage bus gradually filled as Jim collected his passengers from various accommodation locations around Darwin. With introductions completed and old friendships renewed, we headed out of the city. The journey had begun.

An initial surprise for us was to meet the lovely Mel, Jim’s travelling companion. In the days that followed we were to learn that Mel had a great sense of humour, was great company, an excellent cook and a real support to Jim.

Heading south west from Katherine we spent our first night camped beside Victoria River. The early morning sunrise and the brilliance of the sun on the layered rock escarpment behind the camp was our first indication of the spectacular scenery we were to experience as we travelled further into The Kimberly.

As we crossed the West Australian/Northern Territory border and assured the border guards we were not carrying any cane toads, our day became one and a half hours longer. Dinner that night was at the Kunnannara Hotel.

The days that followed all brought their own high level of interest, discovery and adventure. The group moulded into a team of happy campers where everyone pitched in and helped with the daily chores. We came to realise names of places that had existed only in our minds from what we had learned at school or heard on the odd news report were thriving communities.

A helicopter flight over the Bungle Bungles was awe inspiring. The towns of Halls Creek, Fitzroy Crossing and the natural beauty of Geike Gorge were all a wonderful part of our camping adventure.

We had become quite adept at pitching and dismantling our tents, washing and drying dishes and sleeping in the bush. Neither cold showers nor the long days of bumpy roads and river crossings failed to dampen our enthusiasm. However, we received a pleasant surprise when we reached Broome.

Three nights in the Mangrove Resort Hotel complete with pool, spa, breakfast in a dining room and even room service and TV. This was a welcome contrast from our days on the road.

While in Broome we learned how the pearl industry had played such an important role in the town’s history. Some of us visited Willie Creek and saw at first hand how cultured pearls are grown. Some went canoeing while others took the opportunity to wash the red dust from our clothes. Some revelled at the delights of engaging in retail therapy while there was always the pool around which to laze, enjoy the sunshine and read a book.

Some might claim the highlight of the stay in Broome was being able to watch Queensland win the first in the 2007 State of Origin series on Television. Generally, the lasting memory we will all take away with us was the evening we had dinner on Cable Beach while watching the sunset.

We ate prawns and other delights and drank champagne as a camel train slowly made its way along the water’s edge silhouetted against the brilliance of the setting sun. The silky convergence of the yellows, oranges and reds surrounded us as the heavens celebrated the end of another beautiful day.

After Broome it was back on the road and the camping experience continued. We revelled in the beauty of Winjana Gorge, the haunting spectacle of Tunnel Creek and the wonder of finding rock art in places of special aboriginal significance. The Mitchell Plateau with its walks and waterfalls preceded our arrival at El Questro, a haven in the Kimberley wonderland. We bathed in the healing waters of Zeberdee Springs and Capt’n Dave took us on a cruise through the magnificent Chamberlain George. The journey from Broome back to Darwin is documented in the story entitled, ‘Travel – The Gibb River Road’.

After a day of sightseeing and driving along some of the most difficult roads in Australia, we were always surprised by the quality and variety of our evening meals. Our second last night at El Questro had to be seen as a culinary spectacular. Jim, our driver, cooked roast lamb and vegetables in his camp ovens on an open fire. This was the most delicious meal and we awarded Jim and Mel C.F.C. (Camp Fire Cooks) medals for outstanding culinary achievements.

In the evenings we chatted, sang songs, played games such as the trivia night, passed spoons to each other in a hilarious game where the position of one’s knees dictated the outcome. We laughed a lot, especially when Mel introduced us to the ‘ hanging orange beer can bash’.

This was a trip that incorporated an opportunity to see some of the most spectacular scenery in this vast country of ours. Jim was able to speak with knowledge about Northern Australian flora and fauna. He took us to visit numerous sites of historical significance and related fascinating stories from the past.

Each day delighted us with a variety of experiences and adventures. It gave us a chance to appreciate the trials and hardships suffered by the early explorers and allowed us to marvel at what was once the nomadic lifestyle of the aboriginal tribes in the areas we visited.

The Kimberley is truly a place of wondrous beauty and deserves to be visited by all who claim to love our country and its inspirational history.

Geikie Gorge is located within the traditional country of the Bunaba People. who have lived in the Fitzroy Valley for 30,000 – 40,000 years.

The gorge was formed by the Fitzroy River as it carved its way through part of the Devonian Reef. Today the reef is a distinctive feature of The Kimberley. This limestone range stands high above the surrounding savannah woodland where it was uplifted as the sea retreated many millions of years ago.

The shimmering surface of Darwin Harbour hides the remains of ships sunk during the Japanese air raids on Darwin. These wrecks are memorials to the bravery of those who died, and the courage of those who risked their lives to rescue survivors.

Shortly before 9.00 am on the 19th February 1942 a strike force of 188 Japanese aircraft was launched from 4 aircraft carriers located midway between Darwin and Timor.

Darwin was caught unprepared when the first bombs fell destroying a section of the main wharf and killing 22 waterside workers. In the next 20 minutes the planes sank or disabled 21 ships, destroyed most of the waterfriont facilities and wrecked much of the town area.

Darwin RAAF base. At least 290 people were killed and hundreds wounded during the 2 raids.

The Japanese went on to attack Darwin and the Top End of Australia on 64 occasions until 12th November 1943.

Government House was bombed and repeatedly strafed during the first air raid.

Nearby where Government House stands today 9 people were killed when a 450 kilogram bomb fell directly into a trench in which Post Office staff were sheltering.

The first raids on Darwin initially shocked Australia. However, the true magnitude of the destruction was initially censored. A dramatic build up of defence personnel in the area saw more than 60,000 based in the Territory by late 1942.

VICTORIA RIVER, N.T. – A great place at which to wake up and explore 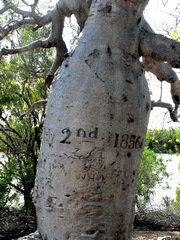 GREGORY’S TREE – A silent witness of our heritage.

Located beside the Victoria River, Gregory’s Tree marks the main campsite of the first European land exploration of the region.

The expedition party, which included Augustus Gregory and 17 other members used the campsite for nine months. Still clearly inscribed on the tree trunk are the dates of the party’s arrival and departure.

In 1855-56 Gregory and his party undertook an extensive survey of the Victoria River Region before returning to Brisbane. During this task information was gathered that greatly added to the scientific and general knowledge of the young Australian colonies.

Gregory’s reports on the potential use of this area for grazing had few positive comments. However, they were enough to suggest that there was potential for large profits to be made. Within a few years of his return the land had been divided into properties and stocked with cattle.

Over the centuries many attempts have been made to produce a man-made pearl, but Nature has guarded her secret jealously.

It was not until the 1920’s that Kokichi Mickimoto and his collegues succedded in cracking the code. They discovered the technique for introducing an acceptable surrogate nucleus into a mother oyster.

Methods gradually improved and quality cultured pearls now compare favourably with Nature’s own and can be produced in a shorter time and in greatly improved numbers.

If a foreign particle, such as a grain of sand, becomes lodged inside an oysterand if the shellfish cannot eject the particle, it proceeds to cover the irritant with layers of a substance called nacre.

This nacre hardens, thus acting as a barrier between itself and the oyster. It is this that eventually develops into a pearl.

While in Broome we visited the Willie Creek Pearl Farm and learned how the now famous famous South Sea pearls are produced from the silver, or gold lip, oyster Pinctada Maxima. As the name suggests, this species is the largest pearl producing oyster in the world growing up to 30cm in diameter and weighing up to 5 kilos.

Broome has become famous for its moon bright pearls and Mother of Pearl for more than 100 years. In particular the South Sea, or Australian Pearl, is revered internationally for its size, colour and lustrous complexion.

To cultivate a pearl, the mother oyster is first brought up from its marine environment. It is gently opened and kept open with woooden wedges.

A sliver of mantle tisue is removed from another oyster of the same species. A tiny slice of the mantle, together with a minute orblet, is inserted into the soft tissue of the mother oyster. The mother oyster is then returned to the sea in a retrievable cradle.

The whole procedure is extremely delicate. Speed and precision are essential and even the most skilled technicians, working with surgical instruments can expect only a small success rate.

An experienced technician can command high fees and is paid a large bonus for every pearl he causes to grow.

(a)  Christ Church Cathedral Darwin.  The front section is part of the first Church of England in the Northern Territory

(b)  During the 2nd world war the Northern Australian railway saw up to 147 trains operating each week. This exibit was at the Pine Creek Station

(c)  The original homestead at the Springvale Heritage Park

(b) The old Post Office at Fitzroy River Crossing

(c) The beach at Broome

FLORA FROM THE TOP END

This story continues under the title ‘THE GIBB RIVER ROAD’.       Read the story…