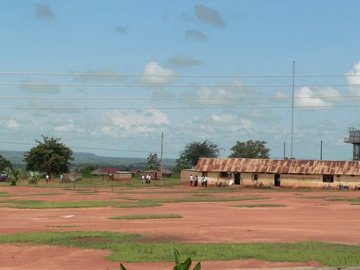 It was the size of a football field. Flat with the occasional grassy patches that had forced their way over the years out of the hard red African surface soil. It lay basking in the hot midday sun close to the Northern Ugandan town of Gulu. The locals referred to the place as “Bomber Ground”.

As part of our 2009  Australian Charity  team which was started by my wife and I in 2006, we were visiting the area.  I stood to one side of the field and looked across to my right at the old, low slung, detention huts with the glassless barred windows. Today there are high school students using these buildings but in the reign of Idi Amin they housed political prisoners.

During that time in the Seventies, anyone even thought to be conspiring against the government, was arrested and thrown into these cells to await their fate. On a regular basis Idi Amin would fly up from Kampala to inspect his troops and pass judgement on the prisoners. He had a well appointed home adjacent to the field.

I was standing on the spot where his personal helicopter would land. Looking across the now deserted ground I envisaged the political prisoners in rows on their knees, with their hands tied behind their backs, waiting for the President to arrive. The fate of those in a similar situation to them was well known to the local population.

Some would be thinking of their families-things they would have liked to have said and done but never got the chance. Others would be mumbling a silent prayer, perhaps uncertain what lay ahead for them beyond Bomber Ground. There would be some of them still angry at being arrested but they had long since learned that protesting their innocence brought nothing but beatings and more pain. Still this had done nothing to allow their anger to abate; only now it had created its own inner pain and frustration.

In the distance they would hear the faint thump, thump of the rotating presidential helicopter blades and the sound would become more distinct and set itself in time to their own heartbeats as the machine came closer to Gulu.

With the helicopter hovering over the parched field prior to landing, the prisoners were sprayed with grit and dust. They kept their eyelids tightly closed for there was no way they could rub their eyes to get relief.

The huge machine settled gently on the edge of the field where I was now standing. The side door would open, steps dropped towards the ground and there bathed in the brightness of the powerful African sun would be the President. He would have been resplendent in his army uniform with its many badges of honour, most of which he had generously bestowed upon himself. 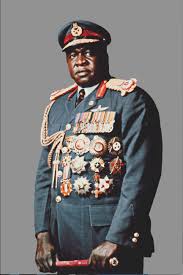 As his feet touched the ground he would have been greeted by his local Generals and senior officers. He would have lapped up the praise and greetings they gave him and then quickly moved off towards the first line of prisoners. As their commander-in-chief he would exercise his authority by removing his revolver from its shiny leather holster and shooting the first person in the line through the head. The prisoner would have slumped forward, his skull hitting the hard dusty Bomber Ground. Blood would have been already oozing from the neat powder rimmed hole made by the madman’s bullet and would be soaked up by the porous surface.

As he swaggered off towards his house the President would give the soldiers the nod to complete the grizerly task of dispensing with all those who might oppose him. The sounds of the soldiers’ repetitious rifle shots would have echoed across the fields to the distant mountains of The Congo, but no one in the world was listening.

In order to show the benevolent side to his twisted nature Idi Amin would often interrupt the shooting proceedings to ask a prisoner what he felt was needed in the area. Responses such as a hospital or school were often built and generally within a short period of time. As a rule, the prisoner making the suggestion never survived long enough to see the outcome. 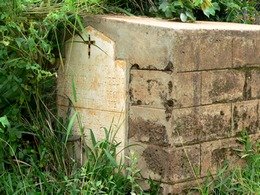 On one such Presidential visit in 1973 a local citizen, Obwona Labeja, who had been arrested for no apparent reason other than he was talking with some friends, boldly stood up and addressed Idi Amin. He told him he was murdering his own innocent people. Those waiting in line around him nodded in agreement. The President saw this as possibly the start of a citizen uprising and promptly had them all shot. A small tomb has been placed on the far side of Bomber Ground to serve as a lasting reminder of this brave man’s action.

Invited to cross the field to see this small monument, I hesitated. I was reluctant to walk across this hallowed ground, so walked around it. While the blood of so many innocent victims has long since leached into the red soil, Bomber Ground remains a holy place. So much so, that the local residents have vowed nothing will ever be built here.

I’m Peter Mack and that’s how it is.